Whew, last vacation post!  We jammed so much in over the four days and learned so much that there was no way I could squeeze everything into 1 or 2 posts.  Thanks for following along :)

So, last thing to do in Napa before heading to San Francisco was the hot air balloon ride.  Derek is afraid of heights.  However, this has been on my bucket list forever.  I knew if I ever got to Napa Valley, I would do the hot air balloon ride.  Derek reluctantly said fine and wanted to make my dreams come true (ha!, I added that last part in there).

Anyway, I woke up in a panic in the middle of the night about this stupid balloon ride.  I was wondering what I got ourselves into... 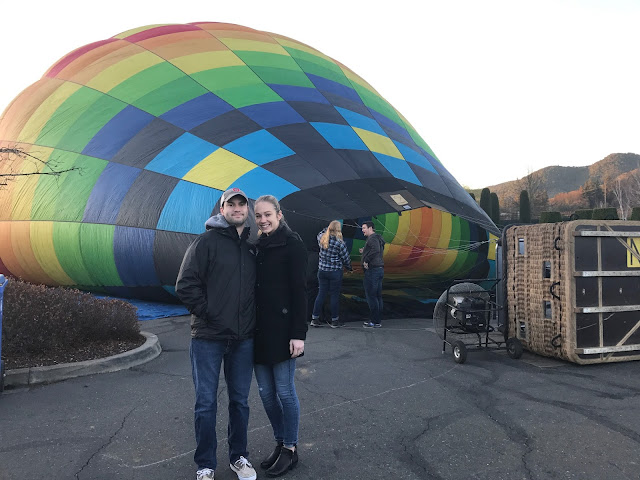 Derek woke up fine and all ready for it.  I was a nervous wreck.  I'm not sure if I was playing off of Derek or what.  I'm not scared of heights...or really anything like this!  I had no idea what my deal was.  Maybe it is because I'm a mom now and doing things that could potentially risk my life sends me into over-driver.  I'll never know!  Anyway, I was ready to get this show on the road...and we had to wait around for the perfect lift off moment.  Like SIXTY MINUTES of waiting around.  I'm being over dramatic, I know.

Something crazy about the balloon...the basket is NOT that high!!  Seriously, like a little higher than my waist.  So no straps or anything and you are right up against the edge.

All this crazy nervous energy aside, the ride was extremely calm and peaceful.  You are not experiencing any wind or anything.  I finally got up the nerve to get my camera and phone out to take some pictures and video. 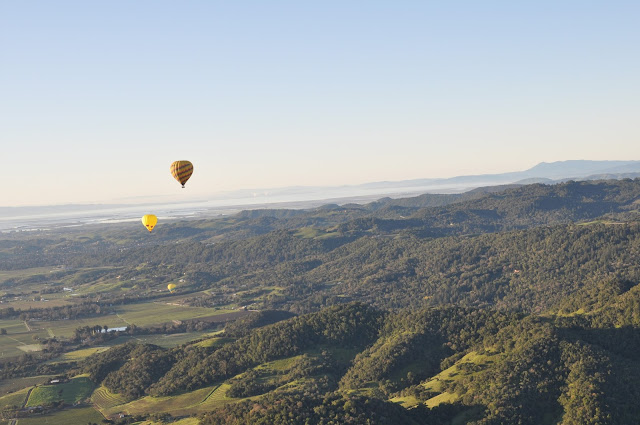 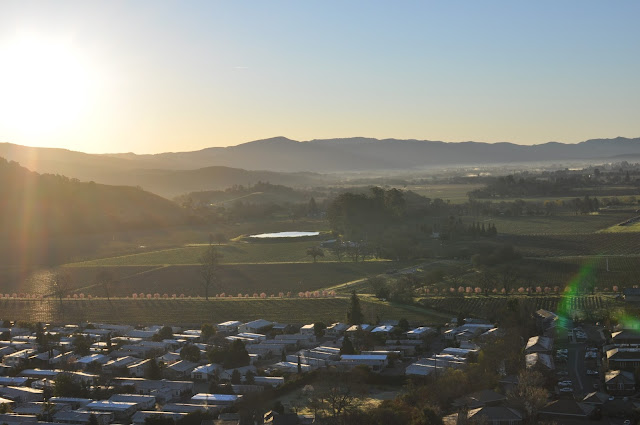 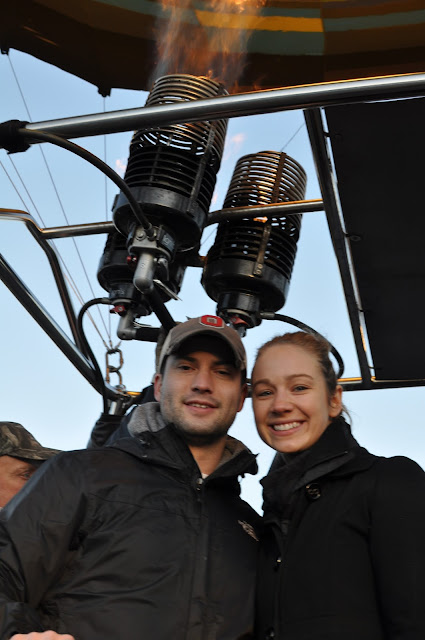 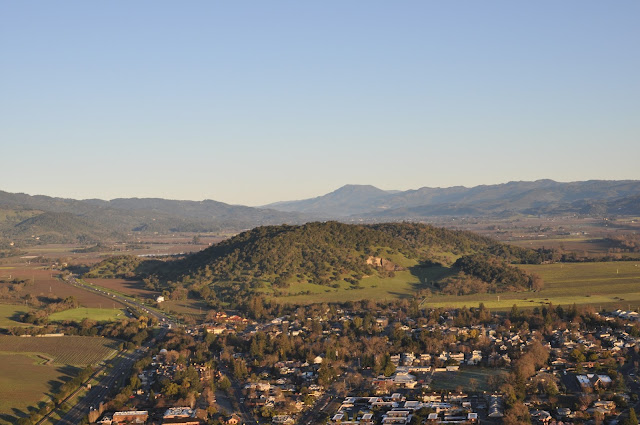 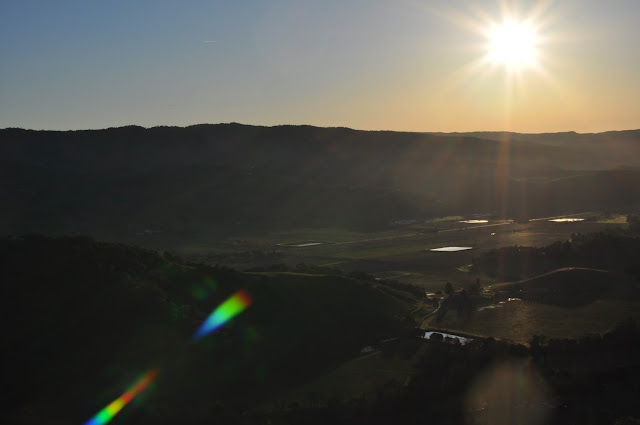 I could tell Derek was very uncomfortable the entire ride.  Later to find out, he was focusing on coming up with a game plan on how to save us if we fell out lol.  Needless to say, we were so glad when we hit land (extremely soft landing) and would never be doing that again.  Thanks Derek for taking one for the team and getting something crossed off my bucket list!

Now we sadly had to check out of our beautiful hotel.  BUT, we were headed to San Francisco! 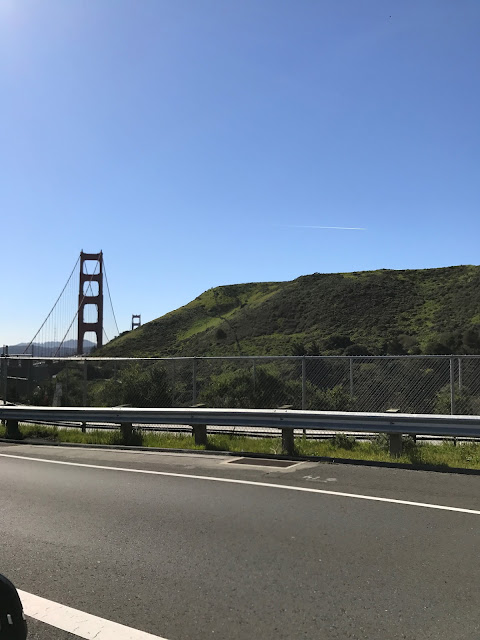 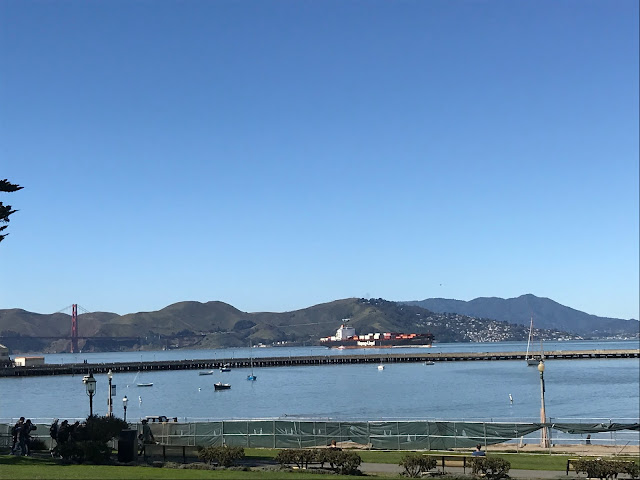 Derek and I are the least touristy people you will ever find.  We explore new places through their food and restaurants.  We never go to museums or really even monuments to see things.  We try our best to get a taste of their culture by staying away from the tourist spots and going where the locals go.  Who knows if we do a good job at this, but we have fun trying!

We had zero plans when getting to San Francisco.  This is never a good idea with Derek and myself.  We function better with plans.  We got in an Uber and asked where to go.  We ended up at Fisherman's Wharf....if you are following, this is the exact place we didn't want to be.  We had no idea what to do!  We grabbed some street tacos from a cool restaurant in the financial district and went back to the hotel to take a nap.  When in doubt what to do...take a nap :)

Derek did some research and we ended up at a super cool, very industrial, small bar, Benjamin Cooper.  This was an absolute gem!  First, the entrance is rather secret, which is pretty cool.  Second, Derek and I had the best oysters we have ever had!  They are known for their specialty cocktails but serve fresh oysters...and man, were they good!  We contemplated staying there for dinner and just eating oysters.

This was the best find because we could chat with the bartenders (usually the best for suggestions!) of where to grab dinner.  He suggested Liholiho, a "hip Hawaiian, Indian, and Chinese eatery" that was just named best new restaurant in the city!  Even though we got there at 5:00, reservations were all full for the evening.  However, there were 2 spots left at a communal table that we jumped all over! 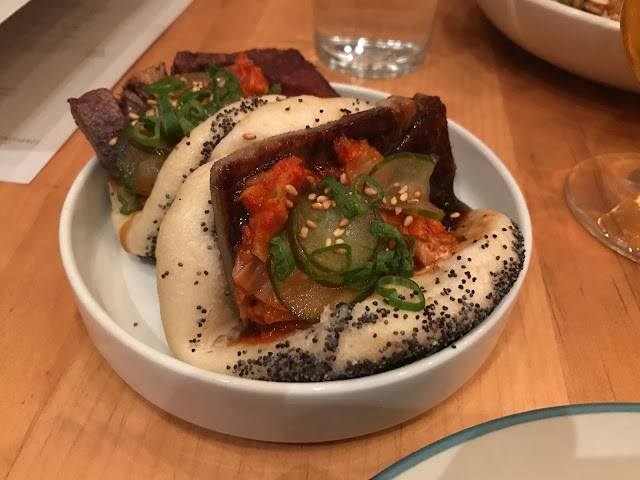 We enjoyed the pork tongue steam buns, hopper shrimp, and wagyu rib-eye.  We ended our trip with an amazing meal!!

We were so ready to get home to our girls..honestly, we wished we were on a plane home that last day.  But they were in such good hands thanks to Derek's parents!

Until next time, Wine Country!

SaveSave
Thoughts of Katie at 7:00 AM


I'm impressed, I must say. Rarely do I encounter a blog that's both equally educative and entertaining, and without a doubt, you've hit the nail on the head. The problem is an issue that not enough people are speaking intelligently about. Now i'm very happy I stumbled across this in my hunt for something concerning this. facebook login

Thank you for sharing
https://aab-edu.net/

Here is  my testimony on how I was cured of HIV by Dr Akhigbe,with his natural herbal medicine.  on a regular basis in efforts to help others when I could. As you may know, each donation is tested.  Well, on July 6th I had a meeting with a Red Cross representative and was told that I had HIV. “What went through your mind when you heard that "Rose" Good question reader! To be honest, I thought my life was over, that I would ever find love, get married, have children or anything normal. Lucky for me I have an amazing support system.  My family supported me then I never thought that I was invincible to STD s or pregnancy or anything else parents warn their kids about. I just didn’t think about it. I was in a monogamous relationship and thought that I asked the right questions.  We even talked about marriage Scary.  During that time I was in college and donated blood on a re as well. who helped me in search of cure through the media.there we saw a good testimony of sister 'Kate' about the good work of Dr Akhigbe natural herbal medicine cure.then I copied his email address and contacted him. A good herbalist doctor with a good heart, he is kind, loving and caring. He replied back to my message and told me what to do. After a week the doctor sent me my herbal medicine and instructed me how to take it.Yes it worked very well, after drinking it I went to the hospital for another test and everything turned negative. What a wonderful testimony I can never forget in my life. Dr Akhigbe is a man who gave me a life to live happily forever so all I want you all to believe and know that cure of HIV is real and herbs is a powerful medicine and it works and heals.  Dr Akhigbe also used his herbal medicine to cure diseases like:   HERPES, DIABETES, SCABIES, HEPATITIS A/B, STROKE, CANCER, ALS, TUBERCULOSIS, ASTHMA, PENIS ENLARGEMENT, MALARIA, LUPUS, LIVER CIRRHOSIS, DEPRESSION, HIV/AIDS, EPILEPSY, BACTERIAL, DIARRHEA, HEART DISEASES, HIGH BLOOD PRESSURE, PARKINSON'S, ALZHEIMER, COLD URTICARIA, HUMAN PAPILLOMAVIRUS,INSOMNIA,  BACTERIAL VAGINOSIS, SCHIZOPHRENIA, JOINT PAIN, STOMACH PAIN, CHROME DISEASES, CHLAMYDIA, INSOMNIA HEARTBURN, ,  THYROID, MAR BURG DISEASES, MENINGITIS, ARTHRITIS, BODY WEAK, SMALLPOX, DENGUE, FEVER, CURBS, CHANCRE, AND OTHERS VARIOUS DISEASES/ VIRUS.   You are there and you find yourself in any of these situations, kindly contact Dr Akhigbe now to help you get rid of it. Here is his email address:
drrealakhigbe@gmail.com      or you can write to him on whats app with his phone number:   +2349010754824.
My appreciation is to share his testimony for the world to know the good work Dr Akhigbe has done for me and he will do the same for you. 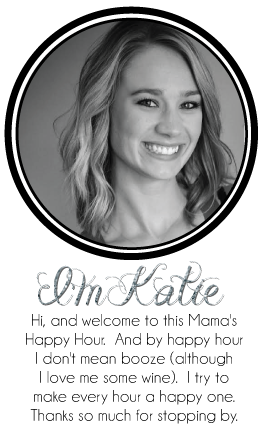